Best Football Academies in Nigeria. Football is a very popular sport in Nigeria, and whenever you travel to any part of the country, it is a common thing to find children playing soccer on the streets.
Over the years, individuals, organizations and government have capitalized on this passion for creating top football academies in Nigeria to groom the youngsters into superstars.

In this post, we look at the Top 5 Best Football Academies in Nigeria that have distinguished themselves over the years. 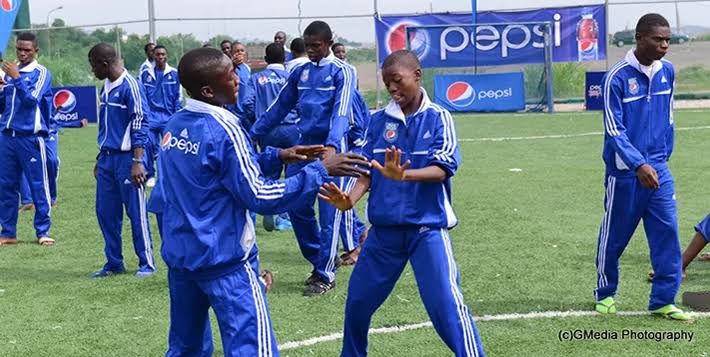 Pepsi football academy was founded in the early 1990s by the popular beverage company, Pepsi. The academy’s main base is the Agege stadium in Lagos, and it also has 14 centres across the country with around 3000 students.

Over the years, it has produced players who have gone to have outstanding careers. Notable products of the academy are John Mikel Obi, Elderson Echiejile, Joseph Akpala, Sunday Mba and Taiwo Awoniyi.

The academy also offers some of its students scholarships to the UK.
The academy’s website is www.pepsifootballacademy.com.

KWFA was founded in 2007 by Kwara state government during the tenure of Bukola Saraki. It has one of the best academy facilities across the country. It offers youngsters the opportunity of playing football and continuing with their education – it uses both the Nigerian and British curriculum.

It admits players between the ages of 13-21. Two of its players were part of the Golden Eaglets squad that won the 2013 U-17 World in UAE. Ahmed Abdul Taofiq who plays for FK Vents polis in Latvia is a product of this academy. It also has players at Kwara United and Bukola Babes.

Abuja Football College is arguably one of the best football academies in Nigeria. AFC was founded in 2012 by Gabriel Volpi (a FIFA licensed instructor) alongside Haruna Abba. The academy is affiliated with the Italian side, La Spezia Calcio and Croatian side, HNK Rijeka.

It annually participates in a youth football tournament in Croatia, coming third three times and winning it once. It also offers education to its wards – all these on a scholarship! Some it’s graduates, Délé Alampasu and Abdullahi Alfa, were part of the U-17 world cup winning squad in 2013, and Benjamin Amos, Orji Okonkwo and Kingsley Michael were in the squad that defended the trophy in 2015.
Italian giants, AS Roma, signed Sadiq Umar and Nura Abdullahi from the academy.

This academy was founded by Nigerian football legend, Nwankwo Kanu in 2001.
The academy is based in Owerri, Imo State. Kanu uses his connections to bring international coaches to train the students on short courses.

Most notable of its graduates are Joel Obi and Stanley Okoro(little Messi).
The academy can be contacted through their email address (papilonwankwokanuinternational@yahoo.com).

MFA is working in association with the Nigerian football federation (NFF). It regularly competes in international youth tournaments across the world. It also offers education to its youngsters.

It has a partnership with some clubs in Europe for its students to engage in trade programs and trials throughout the year.

Other top football academies in Nigeria include: